Sign up or buy a kit and you’ll be entered to win a special Valentine’s Day giveaway!

We just published the most comprehensive study of dog traits ever completed. Here’s what we learned after examining nearly 12,000 dogs from 212 breeds. 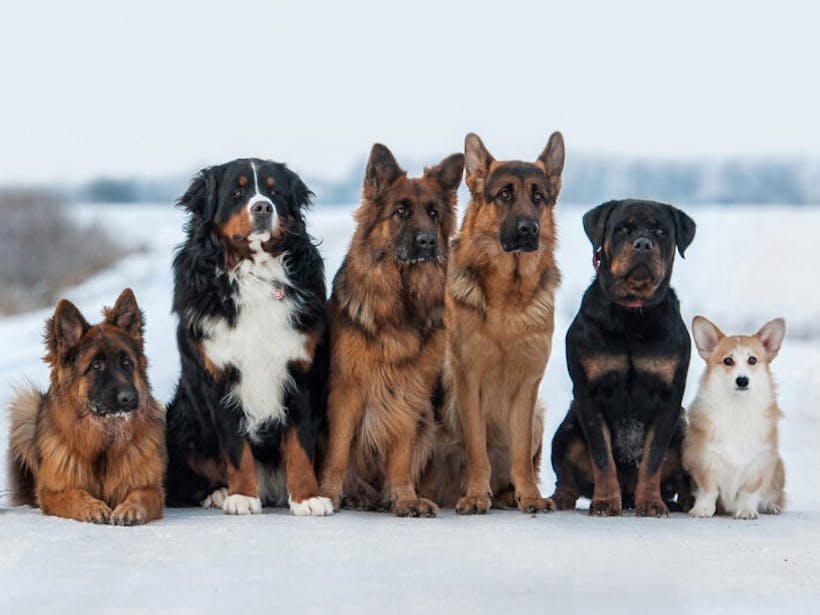 As a veterinary geneticist, I’m passionate about sharing genetic insights that help pet owners provide better care for their pets.

That’s why I’m thrilled to announce that my colleagues and I at Wisdom Health—along with researchers at Purdue University—just published the most comprehensive study of dog traits ever completed. We examined nearly 12,000 purebred dogs from 212 breeds and found that many breeds naturally carry unexpected coat color genes and physical traits. We also uncovered previously hidden relationships between breeds.

Check out the study if you want to dig deeper into the science behind the findings. But if you’re short on time, here’s a roundup of my favorite fascinating tidbits about dog traits.

What causes white spotting in dogs?

White spotting occurs when the pigment-producing cells called melanocytes do not cover a dog’s entire body.

While the puppy is still developing in utero, the melanocytes start along the center of the dog’s back and then spread down the body and around to the face. Think of it like pouring a can of paint over a dog’s back and watching it cover most of the body but not quite reaching the toes, the center of the chest, the tip of the tail, or the middle of the face. That is how it works with melanocytes, too—the areas lacking these cells stay white.

This dog trait is determined by the microphthalmia-associated transcription factor, or MITF, gene. If dogs inherit one copy of the white-spotting MITF gene variant, they typically have some white on their feet, chest, face and tip of the tail. If dogs inherit two copies of this variant, however, they’re often mostly white with just some patches of color.

In our study, we found that the white spotting variant is most common in sporting breeds, such as Pointers, Spaniels and Setters, as well as Terrier breeds. The reason for this is quite interesting: People historically chose dogs with white in their coats when they needed to be able to see the dogs better. People who use dogs to hunt or retrieve game, for example, need to keep track of the dogs in heavy brush or vegetation. White coloring makes dogs much more visible.

Next time you see this dog trait, think about the way pigment cells must have migrated to give the pup its unique look, and consider how easy it would be to find that dog at the park or in the dark.

Why do some dogs have solid-colored coats?

Ever tried to take a picture of an all-black dog? It’s hard, right? Compared to white-spotted dogs, dark-coated breeds were meant to blend in and be inconspicuous.

Why could that be useful? Well, sporting breeds, like the Labrador and Golden Retrievers, are often used in hunting. And when a dog has a solid or bland color, he’s better camouflaged and less likely to scare away game. Unsurprisingly, we found that sporting breeds generally do not carry the white spotting gene variant.

Most black dogs are black because of a dominant gene variant (i.e., a dog needs only one copy of the gene variant to demonstrate the trait). But there’s a recessive gene variant (i.e., requires two copies to show the trait) that causes black, as well. The latter was previously only recognized in six breeds. However, our study found the dog trait to be widespread. At least 89 breeds, including the Weimaraner, Bulldog and Pomeranian, have it!

Think the dog pictured above is white? Think again. Our data showed that several breeds that typically appear to have an all-white coat, such as the Bichon Frise, Maltese, West Highland White Terrier, and Samoyed, are actually platinum blondes.

Genetically speaking, dogs of these breeds have a yellow coat because they carry two copies of the MC1R gene variant for pheomelanin—the yellow pigment in the hair coat. It seems, however, they also have a modifier gene that lightens that pigment so it appears platinum or white. A recent study identified two such modifiers in cream-colored Australian Cattle Dogs and white Alaskan and Siberian Huskies, specifically.

A dog can also have a white coat due to a lack of melanocytes. Since the inner ear needs melanocytes to function properly, these dogs are often deaf in one or both ears. So, a hearing test is one way to identify whether an all-white dog is a platinum blonde or simply lacks melanocytes altogether. Another way is testing the dog’s DNA.

What causes masks in dogs?

Another fascinating finding in our study relates to the “mask trait,” which produces a dark coat over the muzzle of a dog’s face. You’ll typically see this dog trait demonstrated in breeds like the German Shepherd Dog and Boxer.

Before our study, the mask trait was known to affect only 11 breeds. But we found it to be present in 164 breeds, including the Dalmatian, Coton de Tulear and Newfoundland.

Why such a difference in the number of breeds? Well, other dog traits—such as a solid black or brown coat or an all-white coat—often conceal the mask in many breeds, making it impossible to see. So without genetic testing, you may never know if a dog technically has a mask or not.

Why do dogs’ ears stand up?

Another of the gene variants we examined in our study impacts whether a dog’s ears perk or drop. This dog trait has historical roots. How a breed’s ears look usually relates to the job they were bred to do.

For example, dogs that need to be alert and readily react to any instruction—such as those in the herding breed group—have big ears that stand erect and help them hear everything going on all around them.

On the other hand, dogs bred to work around loud noises, like those belonging to the sporting breed group, have drop or down ears that muffle loud sounds, thereby protecting their ears from damage. Drop ears also serve to keep dirt, seeds and other materials out of the ears when working in brush or wet conditions.

What causes short legs in dogs?

Irony at its best, chondrodysplasia is a long term for the short legs trait we see in Dachshunds, Basset Hounds and other low-to-the-ground breeds.

This dog trait appears when genetic mutations cause growth plates in the long bones in a pup’s front and back legs to close early. (In other words, the dog’s legs stop growing faster than the rest of his body, and, as a result, the dog does not reach his full height potential.) Dating back to at least ancient Egypt, this dog trait helps certain hunting breeds chase badgers, rabbits and other prey down into holes or burrows.

Which dog breeds have natural bobtails?

Dogs with a natural bobtail—often called a “stumpy” or “rumpy,” depending on the length of their tail—share a single genetic variant in the T gene. Our study identified 48 breeds that carry this dog trait (38 more than previously known), including the Boxer, Scottish Terrier, and Shih Tzu.

Many of the newly identified breeds do not have obviously short tails. But this particular mutation varies in how much it alters tail length, and it can even cause the tail to kink. And a mildly shortened or bent tail isn’t as unique as a stubby bobtail. Plus, some affected breeds have naturally curled or artificially docked tails, which can further muddy the waters.

So, the only way to truly know whether a dog carries the bobtail gene variant is with a dog DNA test.

Discover the Origins of Your Dog’s Traits

Our understanding of canine genetics—and how they affect a dog’s physical appearance—is constantly evolving. That’s one of the many reasons I find the field is so exciting and fun to work in. We are always learning new, cool things.

Wisdom Panel is a brand of Science & Diagnostics, a division of Mars Petcare.
© 2023. All Rights Reserved