The Braque du Bourbonnais is a good-tempered and agreeable breed. They are calm, intelligent, and kind dogs, as well as keen hunters. 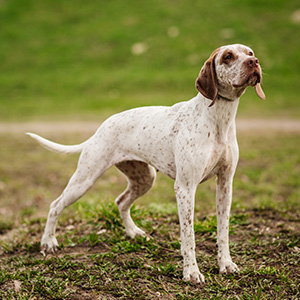 The Braque du Bourbonnais is one of the most ancient pointing breeds developed in France. Its name comes from the word "braque"—a derivation of a French verb meaning "to aim or point"—and the Bourbonnais region of France where it originated during the Renaissance.

The Bourbonnais thrived for a short period after the creation of their first club in 1925. But after World War II, the number of club registrations decreased until it ceased to function. During this time, breeders based their trait selections on secondary characteristics—such as coat color and short tail—instead of the dog's innate hunting capabilities and general form. These choices ultimately made the breed less desirable for hunting, and the Bourbonnais nearly disappeared.

In the 1970s, a man named Michel Comte traveled to France in search of the last true Bourbonnais. Instead, he found only mixed breed dogs with the breed's characteristics. After several inbred litters, he created a breed that closely resembled the original Bourbonnais and registered it in 1973.

The Club du Braque du Bourbonnais re-formed in 1981, and the breed began to participate—and thrive—in field trials. Seven years later, the Bourbonnais came to the United States. Due to the breed's popularity, the U.S. now has the second-largest number of Bourbonnais registered, surpassed only by France.

Today, the breed is famous for its pointing intensity, retrieving instinct, intelligence, and love for its family.

The Bourbonnais is a medium-sized dog with a compact and muscular build. The breed gives the impression of strength and power and exudes a certain elegance.

The Braque du Bourbonnais' coat can be liver or fawn in color, with smaller spots. The breed standard accepts larger spots on the body, so long as they're smaller than the palm of a hand.

One of the Bourbonnais' most notable features is its characteristic pear-shaped head. The breed's rounded eyes are expressive, intelligent, and kind. The color of the eyes is hazel or dark amber—depending on the coat color.

A Bourbonnais' ears are medium-length and can reach or extend beyond the throat. They hang naturally against the cheeks and are flat or slightly curled inwards. They may be born with a short tail or no tail at all. 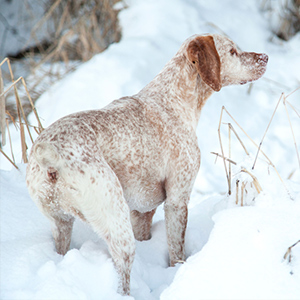 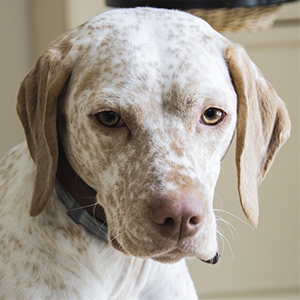 The Braque du Bourbonnais is an intelligent, good-natured, friendly dog that generally loves to be around people. On the flip side, the breed doesn't do well when left alone for long periods.

Bourbonnais are typically easy to train and adapt well to a variety of housing situations—provided they get enough mental and physical exercise.

All dogs have the potential to become overweight or obese. Maintain a healthy weight by monitoring their food and treats. Avoid accidental overfeeding by using a standard measuring cup to measure out their meals. Keep treats to no more than 10% of their calories each day.

Weekly brushing and an occasional bath are typically all that it takes to keep the Braque du Bourbonnais' coat looking clean and healthy.

This breed has fast-growing nails, so be sure to trim them regularly to avoid overgrowth. In addition to splitting and cracking, overly long nails can cause pain or lead to trouble walking or running.

Bourbonnais needs a moderate level of exercise. Aim to include running, long walks, or active play sessions in the backyard in their daily routines.

The Braque du Bourbonnais is eager to learn and respond well to reward-based training using treats or one of their favorite toys. They seek constant eye contact during training sessions and do best with a gentle handler.

Early socialization will also help your Bourbonnais develop into a well-mannered adult dog.