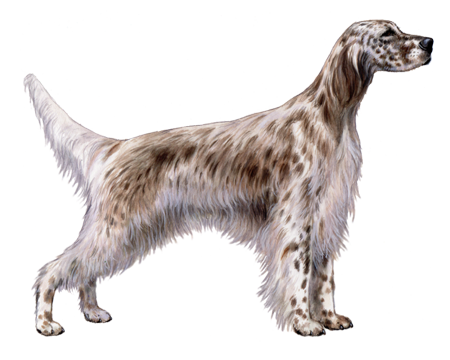 The English Setter is a gentle, intelligent breed that loves outdoor activities. Equally happy hunting in the fields or curling up on the couch, the sweet-tempered English Setter has something for everyone. 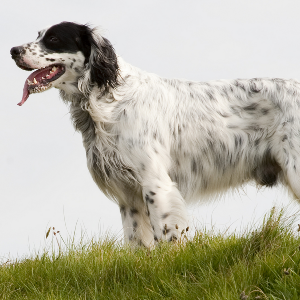 Likely dating back as far as the 14th century, the English Setter is considered the oldest breed of the setter group.

Developed to help hunters track and locate game on the moors, English Setters got their name from their perfectly still sitting position, or "set," around prey.

Though the breed's specific origin isn't entirely known, English Setters have been popular bird dogs since the 1500s. Some experts believe that the breed first came about in France when a Spanish Pointer crossed with a French Pointer. Others think the English Setter originated from the breeding of the Spanish Pointer, Springer Spaniel, and Large Water Spaniel.

In 1825, a breeder named Edward Laverack began developing this breed into what would ultimately define the English Setter brand standard. Purcell Llewellin, another influential breeder, purchased setters from Laverack and then crossed them with other English Setters known for their field capabilities. Llewellin's setters were known to be excellent field dogs. Both types of this breed came to America in the late 1800s. They received recognition from the American Kennel Club in 1878.

Today, English Setters use various stances to indicate the presence and location of birds, including standing still and leaning forward intensely, setting, or pointing.

English Setters are medium-height, substantial dogs. Their clean outline and symmetrical shape give them an elegant, graceful appearance.

The coat of the English Setter is long, silky, and flat. There is no curl or wooliness to it. But there is long feathering on the ears, chest, abdomen, underside of the thighs, back of all legs, and tail.

The English Setter's coat is white with patches and a unique speckling called belton—which comes in various colors. These include orange, blue (black with white), lemon, liver, or tricolor (blue belton with some tan).

The English Setter's head is long and lean. Its skull is oval-shaped when viewed from above, and only slightly wider at the ears than at the brow.

The breed's ears are set well back and low, even with or below the eye level. English Setters are a moderate length, slightly rounded at the ends, and covered with the breed's characteristic long, silky hair.

English Setters have long, lean, and muscular necks that contribute to their graceful appearance. Their tails form a smooth continuation of their topline, tapering to a fine point. Silky hair hangs loosely to create a fringe on their tails. 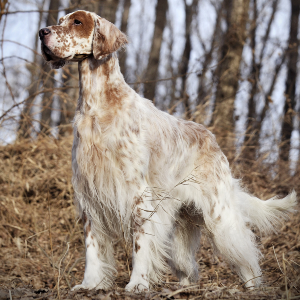 English Setters are one of the best breeds to have around children. They have a mellow temperament, loving nature, and are very devoted to their families. They love being with their people and are happiest when they are involved in family activities.

English Setters are sensitive, playful, and get along very well with dogs and other pets. They are an affectionate breed, even towards strangers. However, English Setters do like to bark and will likely alert their family when someone comes to the door or walks by the house or yard.

Bred as hunters and bird dogs, English Setters may wander off in search of wildlife if left unconfined. It's best to keep this breed in a fenced yard or on a leash when outside.

English Setters can be eager eaters, which puts them at risk for weight gain. To prevent them from becoming overweight or obese, carefully measure their meals and account for treats and snacks. As a guideline, treats should make up no more than 10% of your dog's daily calories.

To maintain their long, silky coats, brush English Setters a few times a week, and bathe them monthly. A long-toothed metal comb works well to prevent tangles and mats. Trim the hair around their face and feet regularly to keep them looking their best.

Also, trim nails regularly to keep them at an appropriate length. Nails that are too long can cause pain or difficulty walking. Dental care is an integral part of any dog's long-term health. In addition to professional cleanings, establish an at-home dental care routine that includes regular teeth-brushing and dental treats or toys.

The bones and joints of English Setter puppies don't reach their full strength until they are about two-years-old. So, it's best to avoid high-impact activities until then. A veterinarian can help you determine the best exercise plan for puppies and young dogs.

English Setters are relatively easy to train. Because they seem to have a sensitive nature, positive reinforcement is the best training method. They respond well to reward-based training using treats or favorite toys. 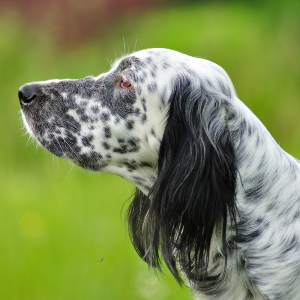 Knowing if your English Setter is a carrier or at-risk for these conditions can help you and your veterinarian plan for your pup’s lifelong care. With Wisdom Panel™ Premium, you can get results for over 200 genetic health tests.